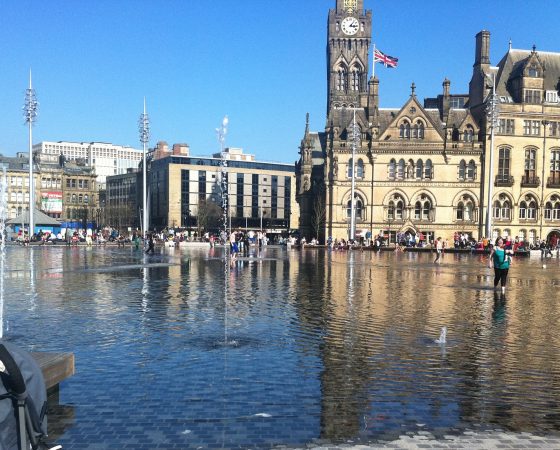 It’s been a pleasure working with the folk at BIASAN over the past few months as part of our Arts Council England funded project – Telling. We produced their story and in response, artists Mussarat (Mo) Rahman and Douglas Thompson made use of the Telling commission and worked with asylum seekers and refugees to make the animation which you can see at the end of this post.

We’re also very much looking forward to welcoming Mo and Douglas to the Engage International Conference in Hull on 30 November where they will collaborate with Ivan Liotchev to deliver a session focusing on intercultural dialogue and making art with marginalised communities across the globe. To register for Conference, please visit engage.org and follow the link to The Whole Picture.

An extract of our story about BIASAN follows:

Mo: the beauty of the place

When I first met Mussarat – a key organiser and artist at BIASAN, known to everyone as Mo – she was at the home of another volunteer in Saltaire. Soon after I arrived, she apologised for appearing a little pre – occupied; that weekend she was due to accompany a BIASAN service user on a visit to her son in Belgium. The woman had acquired her indefinite leave to remain status so was able to travel freely across the European Union (though, of course, that may change soon for different reasons). Her son, however, had not acquired status and so was stuck in Belgium where he awaited the outcome of his application for asylum. Mo knew a little French so she would hopefully be of some support on the journey. Mo seemed largely unperturbed at the prospect of spending the weekend in Belgium with a woman she knew a little and a man she knew not at all. She toId the story in a matter of fact way and I remember thinking, ‘Is this what BIASAN does? Is this what is expected of people working there?’

I told Mo that to me this seemed way above and beyond the call of duty and exceptionally generous. Mo seemed unfazed: it was a thing that needed doing; she had agreed to it so she would do it. Her concern was that they set off on time so that there was no danger of arriving late and missing connections.

We went on to meet with her again several weeks later. The trip to Belgium had not been without its challenges. She summarised the experience:

I can’t describe it. Never again. He was crackers.

We met in a café in North Leeds and ate things involving avocados, pulses and sourdough. The food was good and the bill for the three of us was probably getting on for half of the weekly food budget for BIASAN’s communal meal.

Mo has been involved with BIASAN for around 10 years. Her role is probably best described as multi – dimensional. She seems to do anything and everything that needs doing and over the duration of Telling  she was our fixer, corralling people in to talking to us; setting up meetings; and providing us with background materials. She is a formally trained artist who develops her own projects and who fits her own artistic practice around her ongoing commitment to BIASAN (or perhaps it’s the other way around). Like many of the volunteers we spoke to, BIASAN looms large in Mo’s life. We asked her how she brought an artist’s sensibility to her work with the organisation:

To be honest being an artist doesn’t fit in at all. I felt initially that they expected too many hours out of me which crushed the artist out of me. I was actually just delivering creative arts projects but no art.

That said, ten years on she remains very engaged. She has recruited and selected other artists to work with service users and has enabled BIASAN to collaborate with arts organisations in the city on a range of projects, Cartwright Hall and the National Media Museum amongst others. The way she describes it, art is a form of meditation for Mo:

I’ve done loads of artwork which helps you forget about your own stuff. Art is holistic really… I was an artist before I even got to BIASAN and I’m an artist when I’m out there –  when I do my own work.

I’m trying to find a way of using art as a platform to try to focus the brain. I’ve done loads of activities: painting, illustrations etc. I’m just sitting there creating all these things. Focus on your work and forget about all the other stuff… I think it’s my own passion because I love art, love the process and having that space to do my own stuff.

Like most people we spoke to, Mo describes BIASAN as embodying elements of chaos. It doesn’t suit everyone and even for those it does suit, sometimes it can get too much. Art provides her with a means of separating and recalibrating:

Sometimes I just shut the door and ignore everyone because I need that space. I need to think. In a sense, my brain needs it. That’s why I do it – because it puts me in a different space… I get all of that out of it.

She believes that engaging with art can have a similar impact on people who use BIASAN so she works hard to find small pots of money which enable the organisation to pay artists on a sessional basis. Mo figures that if something captures individuals’ interest, it might temporarily distract them from other things. There’s no predicting what will work so Mo engages a range of artists whose practice varies and – importantly – who are able to function in a non – traditional space where numbers and levels of engagement vary from one week to another. Once there, though, artists need to find their own way because there is no formal induction:

Talking to Lorrain and Douglas later (two resident artists who deliver sessions at BIASAN), they discover that for the past few weeks they have been working in the same space without either being aware of the other’s presence. Having visited BIASAN, Derrick and I had little difficulty understanding how this might occur. We imagined that functioning in the space probably requires a great deal of concentration and focus.

Mo’s approach to the work seems matter of fact and practical. She’s clearly a doer. She talks a lot about what other volunteers do and contribute but seems reluctant to discuss what she gives in anything more than the most general terms. She doesn’t seem to want to draw attention to herself. It’s hard to gauge at first what motivates her to continue to give up so much of her time and energy to BIASAN – where the sense of fellow feeling comes from. Then she drops into the conversation a story about how she has experienced living in Bradford:

I’ve lived all over Bradford. I once had a psycho neighbour. My flat got broken into. The only thing they nicked was a bike. There wasn’t much to nick.

Then when I lived in Southfield Road I liked living there but it was really rough. For an Asian female on my own I was a bit vulnerable, but I can look after myself. The neighbours across the road were horrible. They used to come up to you and look at you and I thought, ‘Yeah, try me’. I’m not into violence and stuff but my issue was ‘This is my pavement and I’ve decided that this is how I’m going to live my life’ so I used to get a lot of shit and they used to think they could pick on me because they thought I was vulnerable but I’m not vulnerable.

I thought, ‘I’ve got a family and brothers and I used to kick shit out of them and I could kick shit out of you.’ So honestly, it was terrible the way they used to be. But I manged to cope with it.

Half of them have moved off. Some are still on drugs and drink. Why should I need to move house because of them? I pay my bills and I make sure I keep a roof over my head. I don’t want to move around like a yoyo. I’m settled there.

Weeks later, when Derrick and I are sitting in the park on that rare hot day trying to make sense of things, Derrick says,

I wonder what made her stay. I wonder why she didn’t leave.

Then neither of us says anything and in the recording you can hear birds and the sounds of a couple playing playing table tennis but not the flies that buzzed around an abandoned sandwich close to the bench.

Mo is made of stern stuff and she seems able to compartmentalise difficult events so that they don’t infect her experience of the world. Despite the neighbours and the break in and the harassment, she likes Bradford. It’s down to earth and friendly. Though less prosperous than Leeds, she likes its distinctiveness. She tells us that people in the asylum seeking system who use BIASAN also describe Bradford as friendly and welcoming. There are limited work opportunities, though, so often once people get their status they move away. For the time that they’re in Bradford, though, Mo sees her role as trying to restore some balance in what can feel like a chaotic and unpredictable period:

You know when you’ve been to hell and back, I try to bring them back into themselves, to feel what it’s like to be in harmony – make them feel a bit more happy in themselves. Sometimes I feel that BIASAN is a place where lost souls are found. That is the beauty of the place.